Posted in Botanicals, Products and People 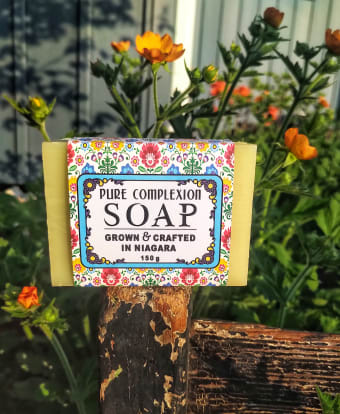 when colonists first began to settle in canada, personal hygiene was as wild and wooly as the hostile environment they sought to tame. settlers coming from italy, france and spain, with their ready supply of olive oil, had well-established soap-making traditions spanning hundreds of years. starting in 1750, the industrial revolution rapidly increased manufacturing capability and major commercial soap-making enterprises sprouted up the world over. creating new soap-making traditions in the 'new world' was slow to develop as the harsh, rugged conditions made survival the number one priority. the end of the civil war in united states heralded an era of heighted knowledge in the matters of sanitation and the health benefits of cleanliness. so great was the interest of the newly-informed-and-wanting-to-be-clean crowd that by the 1850's, the fastest growing industry in the usa was soap. today, the oldest brand on earth is pear's soap and the oldest company in the united states is caswell-massey who started making soap in 1752.

early new-comers to canada, with little opportunity to partake of the lovely varieties of soaps being made quite adroitly around the world, were forced instead to take their desire to be clean into their own hands. in highly isolated settings, it was human vs nature and soap-making was an arduous process of collecting animal fat (tallow) and then mixing it with ash to create a grim concoction that was nonetheless used for washing with grateful appreciation whenever it was available. full-disclosure: early in my gardening career i worked close to a rendering plant near cherry beach in toronto. the smell of animal fat 'cooking' all day would permeate and cling to the air with the vilest of stenches that you couldn't but conclude that tallow was the most horrid of things. tallow and the skin should never intersect. ever. thankfully, by the 1850's, it was commonplace for plant-based oils to be used exclusively in commercial production.

the commerce of clean

all the big boys got their foot in the door early: p&g, colgate, unilever were all early players in the north american soap-making boom. with such competition, smaller company's like the larkin soap company in buffalo, ny had to get really creative to win a loyal customer base. they had salespeople on the street selling soap and savvy housewives hosted 'larkin parties' which became hugely popular as the more larkin soap you purchased, the more 'larkin premiums' you collected which, in turn, earned highly coveted rewards. the larkin soap company was, for many years, the epitome of the american dream: a simple product like soap and the way it was sold created astounding achievements like an office building designed by frank lloyd wright; a residence and 'cottage' built by frank lloyd wright for a larkin employee who started by selling soap on the streets of new york city and then, starting in the mailroom in buffalo, worked his way to the top managing executive position.

around about the first world war, it became increasingly difficult to procure plant-based oils and cheaper more synthetic ingredients were substituted. in fact, it took many years for the term soap to be barred from use from these non-soap products that were, in fact, not soap but detergent. other devious tricks were perpetrated upon an unknowing public in order to flog these inferior non-soap commodities: for example, pear's soap was bought by unilever who immediately moved manufacturing to india and reformulated the original eight ingredient recipe to the current one which contains a flabby twenty-four ingredients; caswell-massey claim that their soap is made in the usa but a deep-dive into their real estate holdings show only a warehouse, admin office and small pop-up shop in nyc with many past employee whistleblowers claiming that their product is produced offshore.

producing a beautifully functional bar of natural soap is what vauxhall aims to achieve. as we work towards a new, on-farm soap factory of our own it is gratifying to learn where a passion for quality natural soap can lead. if we can grasp anything from the soap-making traditions of our forebearers it must be this: washing your skin with a detergent is something you, your skin and the world does not need. the luxury of washing using plant-based oils and delicious plant-based fragrances is a daily ritual that should be cherished at every opportunity. the more we are mindful of the route product gets into our hands, the easier it is to focus on the deeply satisfying experience rather than that duped-by-spin feeling that bad product invariably envokes .

thank you for reading the soap dossier - we hope you enjoyed learning about natural soap! this article (with extra-footage of our in-the-works on-farm soap factory) was delivered to inboxes for those who green-lit receiving our newsletter. we'd love it if you'd sign-up too! please head to our home page and enter your email address. thank you for supporting our farm!

comfrey infused sweet almond oil is for those wanting a full-strength, unblended option for use directly on an afflicted area or as a sweet overall treat to the body in the bath