an epic slice of botany 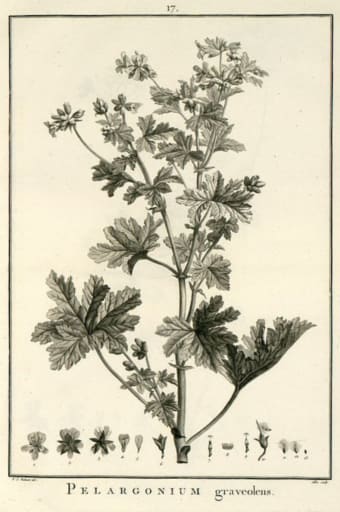 well, hello 2022!! january always brings so many 'feels' as i pore over 2021 with a fine-tooth comb and experience a wide spectrum of thoughts - good and bad. as the new year rolls in and the long, dark nights have turned into long, grey days, i have been giving lots of thought to someone on my advisory-team, joséphine de beauharnais. yes, the signature 'joséphine' that graces our labels on our damask rose and 'attar of rose' geranium products is none other than, the one, the only, empress joséphine. as we all bump, swerve and trepidaciously dip our toes into 2022, let me acquaint you with a woman of uncommon notoriety in human history and how her love of plants not only kept her sane and in-the-game but inspired botanical study and the pursuit of advanced botanical knowledge that we still admire today.

joséphine's highlight reel begins on a plantation on the french colony martinique in the carribean sea. the eldest child of an aristocratic family, joséphine and her family's destiny was abruptly altered when a hurricane blew through one day and they became the ultimate riches to rags story ever heard. at 16 she married an aristocratic creepy jerk with whom she had two children yet she and the children lived separate from him in a convent. vive la revolution! creepy jerk's head was chopped off and boy, did joséphine celebrate! paris must have been insane post-revolution and newly-liberated joséphine attracted many suitors and enthralled young napoléon to the point he was penning epic love letters to her on battlefields and his passion for her inspired many composers and artists of the day as they sought to convey the thrall of such fiery emotion. at the age of 33, she married napoleon and subsequently, at the age of 41, she became empress joséphine living out her days, for the most part, in the delightful malmaison residence.  when a person loves plants and flowers, the thirst to see, touch, smell and learn about botanical treasures is innate. joséphine's true love was not the glittering life that played out in her beloved malmaison: fascinated by nature and with the 'well-connectedness' to seek out information from every strata of life, our girl joséphine elevated the world's knowledge of the plant-world with her curiosity that good fortune allowed her to pursue. this opportunity was not squandered: malmaison was a trove of horticultural delights and to this day, the world's most celebrated botanical illustrator remains redouté who was basically joined at the hip to joséphine back in the day and together they celebrated, and documented, the dazzling array of plant-life that graced the epi-center of culture that perhaps the world has or will ever know again.

during her triumphant years in france, joséphine's early life in martinique haunted her every waking moment and caused her acute self-awareness. her first 16 years were spent in a tropical paradise eating pure, straight-from-the-cane sugar and thus caused her teeth to rot to a terrible degree. however delightful it was to be in her presence, it was is a well-documented characteristic of her habit to hold her hand or scented hankie before her mouth during social interaction. highly perfumed plants like roses and scented geraniums became revered by joséphine and with redouté prolifically illustrating her every plant obsession their rapture (and bottomless funds) led them to publish all of their data and illustrations. with broader access to this knowledge, exclusive plant societies sprung-up and the chatter in well-heeled drawing rooms hit a fever pitch as the world became acquainted with these horticultural delights. botany became a popular academic pursuit and newly-infected plant enthusiasts used what joséphine and redouté brought to the table and delved deeper and deeper into the physiology, structure and bio-chemical properties of these highly-prized aromatic plants.

karma once again visited joséphine post-script in 1991. spending her entire life trying to replicate the lush, equatorial landscape of her youth, joséphine entreated napoléon to 'shore-up' the planter-class on her native island and keep the plantation economy thriving. napoléon, who was no stranger to growing up on a beautiful tropical island utopia, namely corsica, took this suggestion to heart and sought ultimate rule over france and all of her colonies. slavery was abolished by france in 1794 but reinstated by napoléon in 1802 and effected suffering upon millions of people for an additional 46 years until it was definitively abolished in 1848. however proud the people of martinique are of their most famous citizen, her failure to recognize that the highly persuasive effect she had over napoléon could have prevented, not extended and accelerated, the oppressive and brutal reality of a life in bondage. the people of martinique could never forgive this about joséphine and levied a symbolic retribution to her much-celebrated statue.