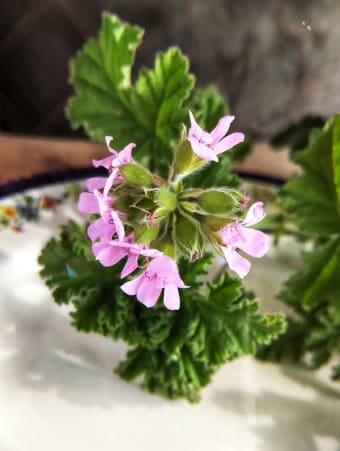 before i tell you all about 'attar of rose' geranium i thought i might just start with a spoiler alert: 'attar of rose' geranium is a highly regarded skin care ingredient because of its uncanny ability to regulate the sebaceous gland that produces sebum. sebum is the skin's oily/fatty, naturally occurring skin protection that complies obediently to geranium's miraculous way of balancing the production/release of sebum in/from the sebaceous gland so that your skin glows with optimum-peformance functionality and balanced protection.  are you ready to travel to france and the indian ocean? curious how a pair of fabled love-struck lovers accelerated a global demand for this horticultural treasure? the bottom-line is, hundreds of years of production has left us with a highly valuable skin care ingredient that continues to deliver unparalleled modern-day experiences.

*illustrations of the sebaceous gland are shown below

long before there were maps, wealthy patrons would 'sponsor' expeditions into the great unknown. oftentimes, botanists or 'plant-hunters' would be funded by the aristocracy/governments/wealthy private collectors to participate in these expeditions in order to appease voracious thirsts for the treasure-potential awaiting on these newly charted lands. one great financer of exploration and discovery was the house of bourbon - a very old and wealthy family from france whose power and notoriety continues to this very day. the deep-pockets of the house of bourbon resulted in some amazing plant discoveries and several legacy plantation economies continue to flourish that bear their name: to this very day, we find a number of lucrative horticultural goodies that were commercialized using the bourbon name: as with the 'attar of rose' geranium, the essential oil is commercially known as 'bourbon geranium' but even more commonly, you may have heard of 'bourbon vanilla' and 'bourbon roses' whose exclusivity are still-thriving sources of wealth.

in the early 1600's, the house of bourbon's cunning and power was aptly demonstrated as they pursued a southerly direction past spain and portugal, followed the western coast of africa, rounded the horn and navigated boldly into the indian ocean. when they sailed up to madagascar and subsequently réunion, these two islands must have looked like two giant treasure chests of bottomless wealth to be extracted. as they were all those hundreds of years ago, these two islands remain ecological paradises with garden of eden level of flora and fauna, storybook waterfalls, idyllic temperatures in which to enjoy epic beaches surrounded by coral reefs. it is here, on the enchanted island of réunion, that the story of 'attar of rose' geranium begins.

the house of bourbon's business model is what we call today a plantation economy.  in this case, the first step was to pillage a botanical treasure from south africa, the 'attar of rose' geranium, and then monopolize its production on the tiny island paradise réunion (the 'newly-colonized' jewel in the indian ocean close(ish) to 'newly-colonized' mega-bauble madagascar). an absence of a vital domestic labour market on these recently 'acquired' territories provided the perfect conditions to 'employ' low-productivity/low-wage labour to 'serve' from cradle to grave with no hope of moving up to the aspirational 'planter class' in their lifetime or their children's children's lifetime. the highly uneven distribution of income/the high degree of control over the entire supply-chain/the marketplace molded to thrive with zero threat is classic textbook house of bourbon. remember, the house of bourbon were next-level 'influencers' with unrivaled pre-revolution swagger. now, with their tight/secretive supply-chain of the oh-so-swoony 'attar of rose' geranium, external markets located thousands and thousands of miles away were locked into mutually beneficial relationships that would play-out for generations.

we all live knowing that, in ontario, agriculture thrives because of a migrant worker labour force that only began in the 1960's so who knows how the future will judge what we currently 'accept' as the way to farm when the future looks back upon us. as we consider the hundreds of years of the cultivation and distillation of the 'attar of rose' geranium on the wee little island of réunion thousands and thousands of miles away from any type of oversight, the agriculture that thrived with a captive labour force who toiled with no knowledge of anything outside their wee, tiny microcosm, well, this dirty filthy truth just stinks. the bourbon geranium, and i mean the add-to-the-coffers bourbon geranium, loses much of its lustre when viewed with a modern-day frame of reference that exposes the greed and the generational oppression levied by those only interested in personal gain.

thankfully, sanity has prevailed and there are 'regional economy' options for 'attar of rose' geranium so you too can experience this valuable skin care ingredient with a happier plant-narrative. we've been growing 'attar of rose' geranium for 14 years now in ontario. we start with custom-grown rootstock and field plant here in niagara starting in mid-may. the vigour right-out-of-the-gates right through some tough heat/drought conditions and low-maintenance input, an astonishing amount of deep-green mounds of rampant growth dominates the waning mid-september garden. everything above-ground is usable: the thick, fuzzy, juicy stems that trap the plant's abundant resin so perfectly; the curled, velvety and uniquely-shaped leaves whose mesmerizing emerald hue provide obvious clues as to the health and vibrancy of the phytonutrients contained within. no flashy flowers, no prima donna behaviour. just a straight-up honest ingredient for your skin and hair. that also smells heavenly. that also balances your entire being. that also is beautifully sustainable.

be sure to check out part 2 - coming soon!

what about that fabled love story that i mentioned at the outset? well, we pick up the story of 'attar of rose' geranium as we sail onward to two other jewel-box islands - one in the carribean ocean and one in the mediterranean sea. sadly, we will still be enmired in plantation economies and epic power struggles, however, we happily conclude that despite all of the drama that has played out in the background of our dear little skin care ingredient throughout history, it actually spawned deeper scientific analysis of this amazing plant which in turn gave a better understanding of how closely it works with the sebaceous gland to ensure that your skin is not too dry, not too oily but 'just right'.