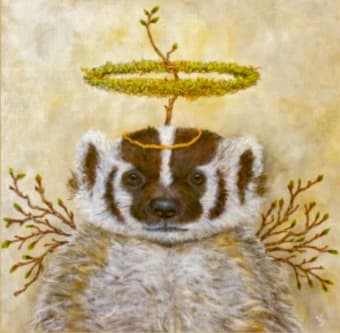 build it and they will come

it is my greatest ambition to entice an american badger to our property here on the biosphere reserve and have it feel comfortable enough to settle in. although this species is almost extinct, there is a known population of badgers less than 50 miles from my farm here in grimsby, ontario and i want to allow them the opportunity to thrive here if they so choose. with no known predators except humans, the remaining sparse badger population is pretty fed-up with us mortals and they will be undoubtedly pretty reluctant to trust my efforts to have them make their home here.

badgers like "areas with lots of old fence-lines, hedgerows, forest/field edges" in which to build their 'sets' and raise their 'kits'. since moving to this location 8 years ago, I have been planting and creating habitat "corridors" for wildlife to move freely through the property and co-exist with the cultivated areas. this spring saw an additional of 50 native trees and shrubs being added and things are really starting to fill out nicely.

coincidentally, i was reading a novel by nancy mitford, don't tell alfred, which centers around life at the british embassy in paris in the late 1950's. imagine my surprise when i discovered that they had a badger living in their garden right in the center of this highly urban area! yes, it was the 1950's and yes, they were harbouring a completely adorable european badger as opposed to the more ill-tempered native american badgers 🤣 (see below) but it filled me with hope that having badgers make their home here is not such an unrealistic possibility.

comfrey infused sweet almond oil is for those wanting a full-strength, unblended option for use directly on an afflicted area or as a sweet overall treat to the body in the bath