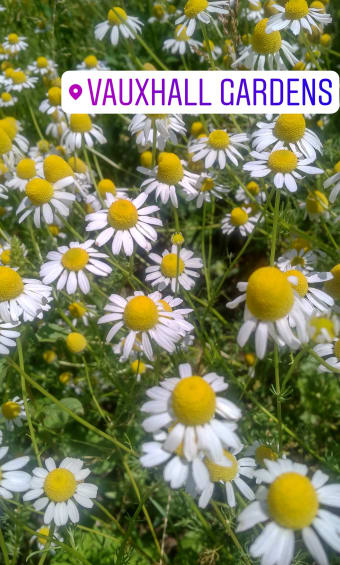 in chamomile we trust

the 2019 growing season marked 12 years of growing chamomile commercially here in ontario ... eight of those years here in grimsby.  the learning curve for growing this capricious little darling successfully is akin to a rollercoaster:  the lofty heights of acheiving super-active extracts that are highly desired for their anti-inflammatory and calming properties (nothing quite like it in the botanical world tbh) to the death-defying drops:  chamomile can be a very tempermental plant to grow so in 'bad' years it can be beyond humbling.

the key to an amazing chamomile crop starts at the very beginning.  we support the research done on the 'zloty lan' cultivar of chamomile and have grown it exclusively for eight years.  chamomile seed is teeny, tiny so it is sown densely, uncovered, in 150' linear rows on as calm and windless day as possible.  honestly, if you can get it sown by mid-april you are going to be absolutely golden ... but we've sown as late at the first of june and although it has still done well it does (frustratingly) increase production labour during an already labour-intensive period in the season.  and, if you ever get the chance to visit our farm, you've got to know that there is either a breeze at best or a gale-force, apocalyptic wind blowing so oftentimes chamomile gets everywhere but we consider that a good thing!

once chamomile has been seeded, the fretting begins.  the earlier in the season the chamomile is sown, the more fluctuation in growing conditions that early spring weather brings.  here on the Niagara Pennisula 'fluctuation' means rain, heavy rain, several ice storms, the possibility of a good couple of major snowstorms and then repeat.  precipitation, whatever its form, is something that chamomile can handle quite well ... it's the dry-spells and the hot spring/late spring sun combo that chamomile absolutely despises.  one day however, after all the worry, a sea of itty-bitty little seedlings germinating quickly evolves into a dense, green carpet and then you are well on your way.  after you've seen a million chamomile seedlings germinate, you will be an expert at what a chamomile seedling looks like and you will quickly start to identify interlopers.  removing these non-chamomile seedlings is one of the most laborious chores of raising chamomile:  everything is at such a miniscule and delicate stage that it requires intensive, very-fine weeding but if it is not done during the very early stages of growth the crop yield and quality will be directly impacted.

reaping what you sow

as that clean, fresh, green chamomile seedling carpet starts to gain growth, we hand-hoe close up to the painstakingly-weeded seedlings and cultivate the 'aisles' with the super a.  if you can get in there and give it a serious once-over with the hoe and then tractor-cultivate every 10 days or so for a few weeks, you are going to be well-rewarded.  we have never irrigated the chamomile and have found out that this botanical prima dona will tough it out when challenged once it gets some growth on it.  yes, it does perform better when we get regular rain or it's cooler and the soil retains moisture better but when it is forced to tough it out, the harvesting period starts a little later and perhaps is a little sparser but it will go longer because of the irregular germination natural growing conditions invoke.

and then the magic starts to happen ... have you ever seen a chamomile crop dancing in the wind?  well, it is a sight to behold!  the graceful habit of the plant itself and the lovely colour play of the green, lacy foliage against the cheerful white and yellow flowers blooming extravagantly is chamomile's reward.  it is at the peak of its lifespan that the harvesting begin.  each little flower needs to be removed and we do so with a chamomile rake.  plastic rakes are more desirable than the metal ones because they are gentler and the key is to take what comes off with ease leaving the plant as unmolested as possible.  the more gentle you are with the harvesting the longer the harvest period.  there is also the added bonus that if you don't go too hard on them during harvest, when the cooler temperatures come along in late summer and early fall, there is a better chance of the plants bouncing back and another harvest is possible.

fresh chamomile is distilled for our hydrosol and semi-fresh is made into glycerites.  freshly cut chamomile stems also makes an exceptionally long-lasting cut flower and it's freshness and elegance really enhances a bouquet.  all of the remaining chamomile is laid out on paper in the drying shed and carefully watched to make sure that it covered and stored once it is dried.  during the season, when everything is going gang-busters, drying space is at a premium so this isn't really a problem but it is worth mentioning because chamomile still demands attention even after it is dried.